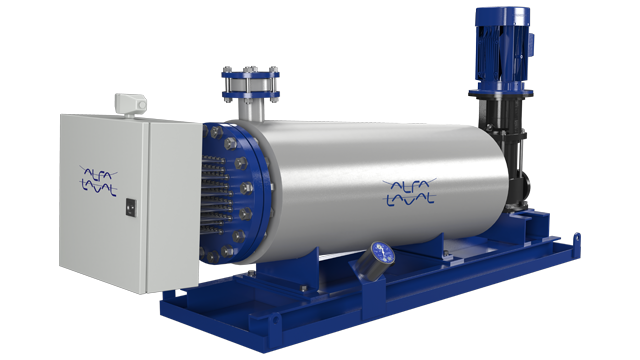 The Aalborg EH-S is installed horizontally and comes as a complete unit with control cabinet and pre-mounted pump, safety valve and non-return valve, ready for installation.

Connected to the auxiliary steam boiler, the Aalborg EH-S heater is for certain ship types replacing or acting as a Donkey boiler and an alternative to conversion of boilers for MGO operation. The Aalborg EH-S heater complies with European standards and is designed for easy approval by the classification societies.

For certain ship types, the installation of the Aalborg EH-S electric flow through heater may be the ideal option for the so-called harbour / hotel mode. The return on investment is shown below based on the actual specifications and conditions of operation. The curves of the
diagram represent the typical investments and running costs for a 47,000 DWT Product Carrier with a 20 t/h boiler plant and an economizer. 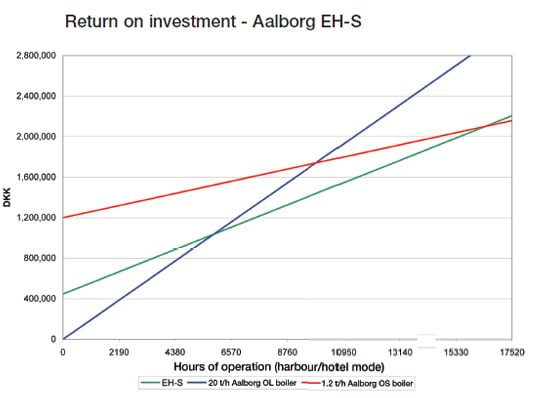 For all curves, the fuel oil costs are based on a market price of USD 350 per metric ton (October 2009). Operational costs such as maintenance and the like are not considered in the curves. In addition to the direct investment and operational costs, a number of indirect costs and savings should also be considered. Amongst these are the extended lifetime and reduced maintenance of components, etc. of the oil-fired boiler plant if operation with a
turndown ration of approx 1:10 is avoided. Additionally, investment in the Aalborg EH-S heater or the
Aalborg OS boiler adds a 100% redundant steam system to the
existing boiler plant.

The typical type of vessels for the use of electric operated steam are: